Well it is that time of year when fog happens.  We get a fair share of it here in the Pacific Northwest, and it one of my favorite times to search out photo opportunities.  I had not been down along our city’s water front for quite awhile, so with the fog approaching, off I went.  It was also cold, just above freezing by one or two degrees. not enough for ice or frost, but close.  It was a lot of fun, even in the cold.  We have a very active bicycle community here, so a lot of folks commute to work on bicycles, and this waterfront route gets a lot of that traffic.  There was also a large number of folks on foot for their morning walk, and also heading for work.  We also have a lot of bridges to the heart of the city.  Ten in the downtown area, one more on the outlying edge of the city and then one more that gets you into Washington state (or back if need be). There are a few more out around the edges as well.  I have included a good portion of those in previous editions on this blog, at different times of the year.  The images also lend themselves to black and white conversion quite nicely.  Some you cannot even tell the difference unless it is made dramatic. I did that on a couple just for fun.  The shapes and patterns are the challenge in many of these.  I do not go onto all of the bridges, the freeway bridges do not have pedestrian access.  It’s all fun. 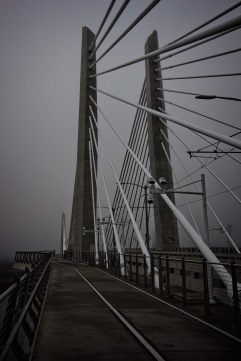 photos for a hobby and relaxation. keeps the creative juices flowing. END_OF_DOCUMENT_TOKEN_TO_BE_REPLACED
This entry was posted on Tuesday, December 27th, 2016 at 9:39 am and posted in Uncategorized. You can follow any responses to this entry through the RSS 2.0 feed.
« Snow Day
Half and Half »